Reviews relating to products that have been replaced or discontinued from our current range. 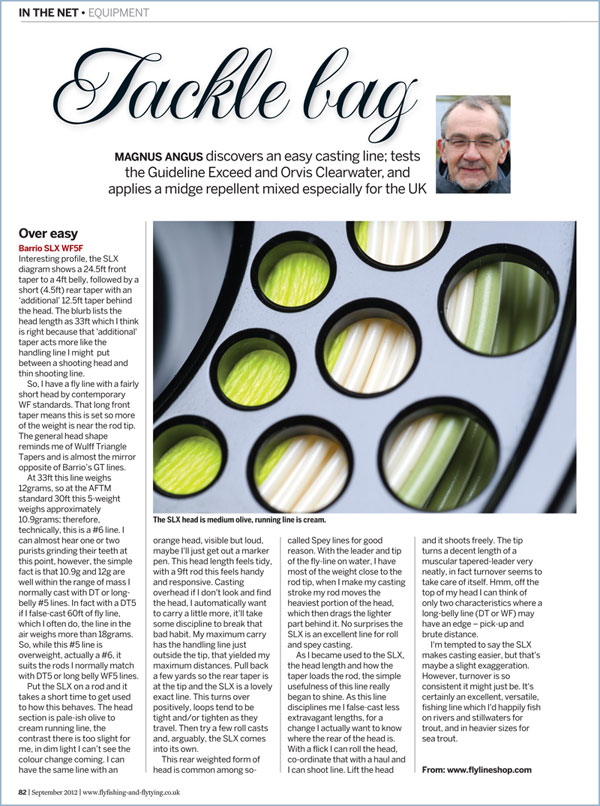 Interesting profile, the SLX diagram shows a 24.5ft front taper to a 4ft belly, followed by a short (4.5ft) rear taper with an 'additional' 12.5ft taper behind the head. The blurb lists the head length as 33ft which I think is right because that 'additional' taper acts more like the handling line I might put between a shooting head and thin shooting line.

So, I have a fly line with a fairly short head by contemporary WF standards. That long front taper means this is set so more of the weight is near the rod tip. The general head shape reminds me of Wulff Triangle Tapers and is almost the mirror opposite of Barrio's GT lines.

At 33ft this line weighs 12grams, so at the AFTM standard 30ft this 5-weight weighs approximately 10.9grams; therefore, technically, this is a #6 line. I can almost hear one or two purists grinding their teeth at this point, however, the simple fact is that 10.9g and 12g are well within the range of mass I normally cast with DT or long-belly #5 lines. In fact, with a DT5 if I false-cast 60ft of fly line, which I often do, the line in the air weighs more than 18grams. So, while this #5 line is overweight, actually a #6, it suits the rods I normally match with DT5 or long belly WF5 lines.

Put the SLX on a rod and it takes a short time to get used to how this behaves. The head section is pale-ish olive to cream running line, the contrast there is too slight for me, in dim light I can't see the colour change coming. I can have the same line with an orange head, visible but loud, maybe I'll just get out a marker pen. This head length feels tidy, with a 9ft rod this feels handy and responsive. Casting overhead if I don't look and find the head, I automatically want to carry a little more, it'll take some discipline to break that bad habit. My maximum carry has the handling line just outside the tip, that yielded my maximum distances. Pull back a few yards so the rear taper is at the tip and the SLX is a lovely exact line. This turns over positively, loops tend to be tight and/or tighten as they travel. Then try a few roll casts and, arguably, the SLX comes into its own.

This rear weighted form of head is common among so-called Spey lines for good reason. With the leader and tip of the fly-line on water, I have most of the weight close to the rod tip, when I make my casting stroke my rod moves the heaviest portion of the head, which then drags the lighter part behind it. No surprises the SLX is an excellent line for roll and Spey-casting.

As I became used to the SLX, the head length and how the taper loads the rod, the simple usefulness of this line really began to shine. As this line disciplines me I false-cast less extravagant lengths, for a change I actually want to know where the rear of the head is. With a flick I can roll the head, co-ordinate that with a haul and I can shoot line. Lift the head and it shoots freely. The tip turns a decent length of a muscular tapered-leader very neatly, in fact turnover seems to take care of itself. Hmm, off the top of my head I can think of only two characteristics where a long-belly line (DT or WF) may have an edge - pick-up and brute distance.

I'm tempted to say the SLX makes casting easier, but that's maybe a slight exaggeration. However, turnover is so consistent it might just be. It's certainly an excellent, versatile, fishing line which I'd happily fish on rivers and stillwaters for trout, and in heavier sizes for sea trout. 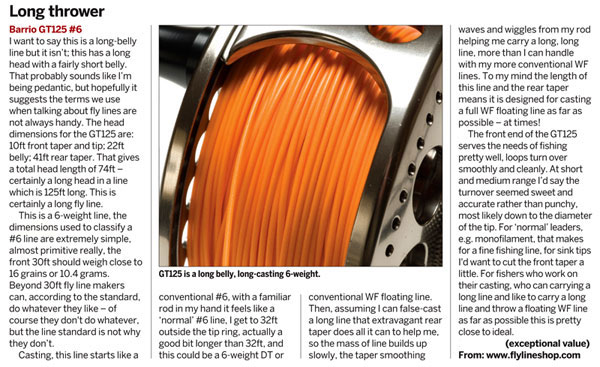 I want to say this is a long-belly line but it isn't; this has a long head with a fairly short belly. That probably sounds like I'm being pedantic, but hopefully it suggests the terms we use when talking about fly lines are not always handy. The head dimensions for the GT125 are: 10ft front taper and tip; 22ft belly; 41ft rear taper. That gives a total head length of 74ft - certainly a long head in a line which is 125ft long. This is certainly a long fly line.

This is a 6-weight line, the dimensions used to classify a #6 line are extremely simple, almost primitive really, the front 30ft should weigh close to 160 grains or 10.4 grams. Beyond 30ft fly line makers can, according to the standard, do whatever they like - of course they don't do whatever, but the line standard is not why they don't.

Casting, this line starts like a conventional #6, with a familiar rod in my hand it feels like a 'normal' #6 line, I get to 32ft outside the tip ring, actually a good bit longer than 32ft, and this could be a 6-weight DT or conventional WF floating line. Then, assuming I can false-cast a long line that extravagant rear taper does all it can to help me, so the mass of line builds up slowly, the taper smoothing waves and wiggles from my rod helping me carry a long, long line, more than I can handle with my more conventional WF lines. To my mind the length of this line and the rear taper means it is designed for casting a full WF floating line as far as possible - at times!

The front end of the GT125 serves the needs of fishing pretty well, loops turn over smoothly and cleanly. At short and medium range I'd say the turnover seemed sweet and accurate rather than punchy, most likely down to the diameter of the tip. For 'normal' leaders, e.g. monofilament, that makes for a fine fishing line, for sink tips I'd want to cut the front taper a little. For fishers who work on their casting, who can carry a long line and like to carry a long line and throw a floating WF line as far as possible this is pretty close to ideal. 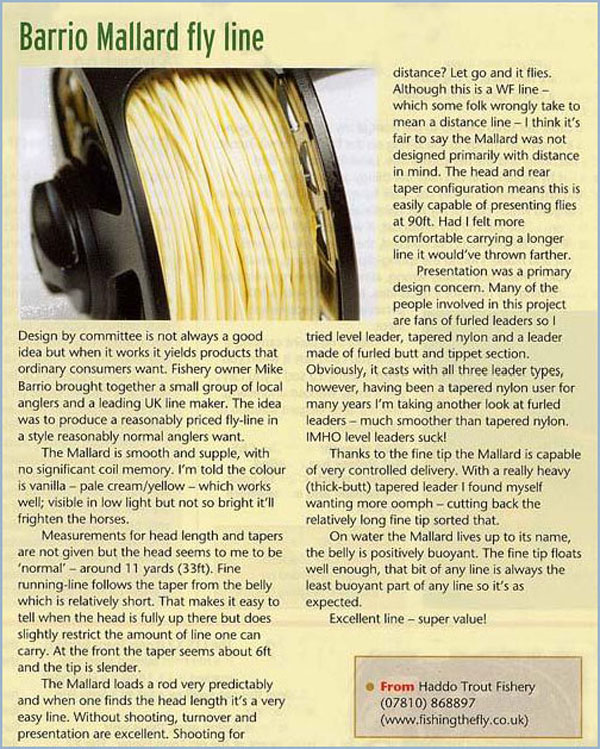 Design by committee is not always a good idea but when it works it yields products that ordinary consumers want. Fishery owner Mike Barrio brought together a small group of local anglers and a leading UK line maker. The idea was to produce a reasonably priced fly-line in a style reasonably normal anglers will want.

The Mallard is smooth and supple, with no significant coil memory. I'm told the colour is vanilla - pale cream/yellow - which works well; visible in low light but not so bright it'll frighten the horses.

Measurements for head length and tapers are not given but the head seems to me to be 'normal' - around 11 yards (33ft). Fine running-line follows the taper from the belly which is relatively short. That makes it easy to tell when the head is fully up there but does slightly restrict the amount of line one can carry. At the front the taper seems about 6ft and the tip is slender.

The Mallard loads a rod very predictably and when one finds the head length it's a very easy line. Without shooting, turnover and presentation are excellent. Shooting for distance? Let go and it flies. Although this is a WF line - which some folk wrongly take to mean a distance line - I think it's fair to say the Mallard was not designed primarily with distance in mind. The head and rear taper configuration means this is easily capable of presenting flies at 90ft. Had I felt more comfortable carrying a longer line it would've thrown farther.

Thanks to the fine tip the Mallard is capable of very controlled delivery. With a really heavy (thick-butt) tapered-leader I found myself wanting more oomph - cutting back the relatively long fine tip sorted that.

On water the Mallard lives up to its name, the belly is positively buoyant. The line tip floats well enough, that bit of any line is always the least buoyant part of any line so it's as expected.

Weight forward lines dominate the fly line sales. That said, I know a fair number of regular fly fishers who have switched to DT lines and love 'em. We probably all know the differences - DT is one long belly with a taper at each end - WF is a shorter belly with thin running line at the back and front taper at the pointy end. We're told that DT lines offer better presentation while WF lines are 'for distance'.

Mike Barrio's lines are smooth and supple. The cream coating sits nicely on water and is visible without being lurid. Compared to a WF line I really can't say presentation was any different at short range. Then comes the end of the WF head.

From the moment that head reached the tip ring, I seem to have more control with the DT. With the WF I need to shoot line, with the DT I simply aerialise more. As the loop reaches the end of the WF line, if I've judged it right the whole lot straightens and falls. With the DT it does seem easier to make more consistent turnover - I'd guess because I'm shooting little or nothing most of the time. Start roll casting and again, when the WF head is all out I need to switch cast, the DT keeps on going. Where mends and curves are part of the game, at longer distances the DT has distinct advantage. 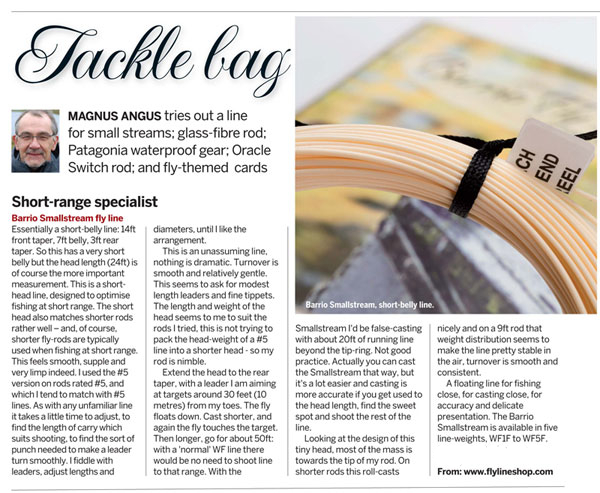 Essentially a short-belly line: 14ft front taper, 7ft belly, 3ft rear taper. So this has a very short belly but the head length (24ft) is of course the more important measurement. This is a short-head line, designed to optimise fishing at short range. The short head also matches shorter rods rather well - and, of course, shorter fly-rods are typically used when fishing at short range. This feels smooth, supple and very limp indeed. I used the #5 version on rods rated #5, and which I tend to match with #5 lines. As with any unfamiliar line it takes a little time to adjust, to find the length of carry which suits shooting, to find the sort of punch needed to make a leader turn smoothly. I fiddle with leaders, adjust lengths and diameters, until I like the arrangement.

This is an unassuming line, nothing is dramatic. Turnover is smooth and relatively gentle. This seems to ask for modest length leaders and fine tippets. The length and weight of the head seems to me to suit the rods I tried, this is not trying to pack the head-weight of a #5 line into a shorter head - so my rod is nimble.

Extend the head to the rear taper, with a leader I am aiming at targets around 30 feet (10 metres) from my toes. The fly floats down. Cast shorter, and again the fly touches the target. Then longer, go for about 50ft: with a 'normal' WF line there would be no need to shoot line to that range. With the Smallstream I'd be false-casting with about 20ft of running line beyond the tip-ring. Not good practice. Actually you can cast the Smallstream that way, but it's a lot easier and casting is more accurate if you get used to the head length, find the sweet spot and shoot the rest of the line.

Looking at the design of this tiny head, most of the mass is towards the tip of my rod. On shorter rods this roll-casts nicely and on a 9ft rod that weight distribution seems to make the line pretty stable in the air, turnover is smooth and consistent.

A floating line for fishing close, for casting close, for accuracy and delicate presentation. The Barrio Smallstream is available in five line-weights, WF1F to WF5F.